SignBlaster! is the simplest digital sign content and publishing tool ever made. It takes your PowerPoint and publishes the slides to any number of digital signs. We offer a single-user version that stores content on your computer, and a multi-user version that stores content on a Best Wave server for a nominal annual charge. With the multi-user version several people can see what is currently in the playlist, even if they are in geographically distributed locations.

One-To-One Mode
Slide 1 goes to display 1, slide 2 to display 2, and so on. Change the PowerPoint and Blast! it out again in seconds.

One-To-Many Mode
Publish several slides to a single display or one slide to several displays by putting a list of the display numbers inside the notes section of each slide. For example, if you want slide 1 to appear on displays 1, 3 and 5; simply type 1,3,5 in the notes for slide 1.

The duration of each slide on the screen is controlled by the "Time to advance:" field like any PowerPoint. Nothing new to learn, so there are no barriers to incredible and flexible signage.

Your list of displays is stored in an Excel spreadsheet with three columns:
Display Number - Display Name - Display ID
The display numbers are 1, 2, 3, etc. the display names are whatever makes it easy for you to remember which display is which, and the Display IDs are hardware identifiers from the displays.

You can divide the list into several spreadsheets, to group your displays. Send one PowerPoint to all of your lobby displays, another to your retail store displays and a third to your factory floor displays. This same concept extends throughout the company, across the nation or around the world...

SignBlaster! publishes your slides via the Best Wave server on the web, so the displays can be anywhere in the world. All you need is an Internet connection.
The simplest interface ever! 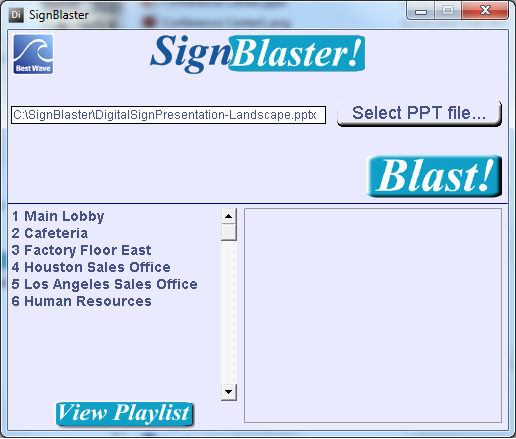 SignBlaster! is simple to use. Just select a PowerPoint file and click Blast! In seconds your displays are updated. To view the playlist for any display, highlight its name and click View Playlist That's all there is to it!
Download Center
Select a Download:
To download via FTP - Host: bestwave.com
Username: BestWaveGuest.bestwave.com
Password: bwguest
DOWNLOAD IT NOW! Download SignBlaster! for your Windows PC, or the player for your Android device. Contact support@bestwave.com for a 30-day free trial!

Prerequisites: Microsoft PowerPoint and Microsoft Excel must be installed on the computer running SignBlaster! COMPATIBLE HARDWARE 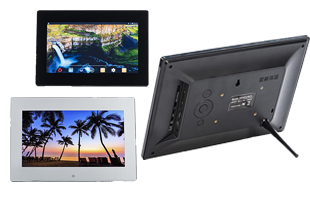